Rotary members in Avon Lake, Avon, Sheffield Lake and Sheffield Village are among thousands reaching out on October 24, 2016  – World Polio Day to raise awareness, funds and support to end polio – a vaccine preventable disease that still threatens children in parts of the world today.   Our local communities have donated towards the Eradication of Polio while playing our Putt-out-Polio game at our Great Pizza Bake-Offs and Home Depot Safety Fair Events.  Donate while playing the game at our Great Pizza Bake-Off at Brookside High School Cafetorium, on Thursday October 27th, 2016 from 5 PM to 8 PM!

Since Rotary and its partners launched the Global Polio Eradication Initiative nearly 30 years ago, the incidence of polio has plummeted by more than 99.9 percent, from about 350,000 cases a year to 26 confirmed as of Sept. 19, 2016.  To sustain this progress, and protect all children from polio, experts say $1.5 billion is urgently needed. Without full funding and political commitment, this paralyzing disease could return to previously polio-free countries, putting children everywhere at risk. 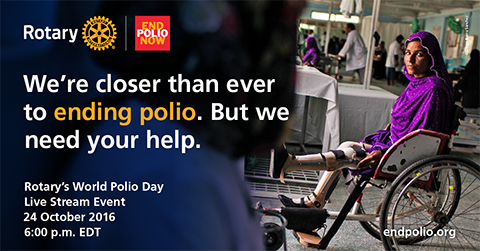